Now The Traveling Morgans can say they have seen the largest living things known on earth. We have seen large and old trees all over the country. The Giant Sequoia are beyond understanding. The largest are over 2000 years old, and once thought to be the oldest tress. Some knarled and twisted Bristlecone Pine have proven to be twice as old as the the stately Giant Sequoia, but the wonder of seeing these giants is not diminished. 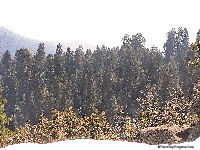 At left is the General Sherman Tree, largest on earth, estimated to be 2000 years old. At right is the largest grove of Giant Sequoia in the world.
Mt Whitney, tallest peak in the 48 contiguous states, is at the east end of the park.
Oddly enough the lowest point in the 48 contiguoous states, Badwater in Death Valley National Park, is less than 85 miles from Mt Whitney. 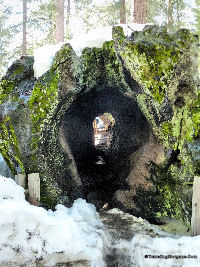 At near left is the General Grant Tree, second largest on earth. At right is the trail through the Fallen Monarch. The visitor center was still covered by snow in mid-April. Large waterfall just outside the joint entrance of the parks. 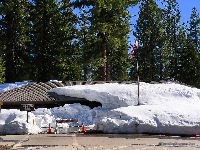 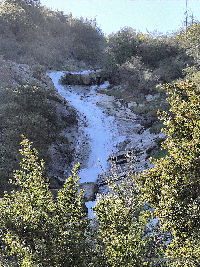