The Traveling Morgansfind the wildlife in Custer State Park to be the greatest evidence of proper wildlife management in the USA.

You can get a rough idea of what the land was like before 1492.

The famous (or infamous) "begging burros" of Custer State Park are descendants of the burros used by gold hunters and miners of the late nineteenth and early twentieth centuries. They are sometimes referred to as laughing burros.

They are sweet, but extremely persistent in their begging. Beggin Burro up close with head in car. Custer State Park maintains an active herd of over 1000 Bison, or American Buffalo. Bison Herd. Every fall, they are all rounded up and the excess sold. Bison meat is extremely lean and generally healthier to eat than beef.

Remember the Bison have right of way and are extremely dangerous animals. 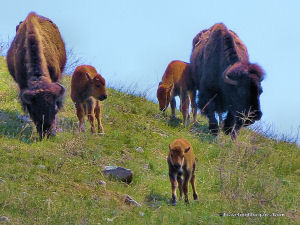 A snowy winter means a fine group of energetic calves in the spring. 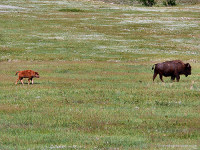 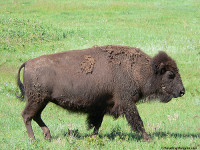 Bison have been in the Black Hills area since they shared the land with Wooly Mammouths in the last Ice Age.

Bison are the last of the Ice Age MegaFauna. See The Mammouth Dig for related information.

Groups of 200 and more are common on the Wildlife Loop Road and various gravel roads. Views like the one at left give an idea of what it was like before the great "Buffalo Slaughter" of the 1880's. The video below gives a better idea of the scope than any still picture, since the herd scatters a bit.

The Pronghorn Antelope (left) is wonderful to see in the wilds of Custer State Park.

In early summer, you will often see a male with a harem of pregnant females. 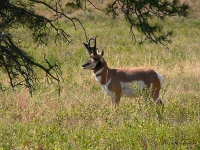 The Pronghorn is the second fastest land animal.
Only the Chetah is faster, and the Pronghorn can maintain its top speed much longer than a Cheetah. 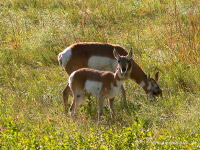 Seeing a mother and young was a great treat. 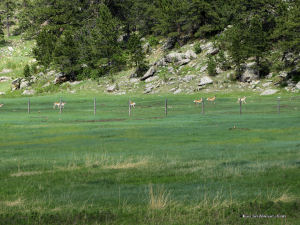 Pronghorn juvenile herd. Check the PARTY WITH THE ANIAMLS video list above to see the juveniles in action.

The Big Horn Rams are majestic animals, rather depleted by a recent lung disease.

The females (ewes) appear to have the equivalent of a sewing circle near the Coolidge general store. Their coats have not quite recovered from the virus that swept the animal community. 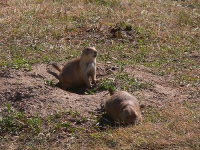 Prarie Dogs are one of the secrets of the abundant wildlife and fauna of the Great Plains of days gone by. Out in the wild, these entertaining animals are inoffensive. Ranchers and farmers have good reason to tell a different story. 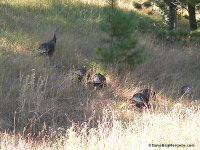 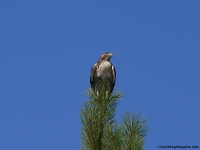 The Prairie Falcon is the best known of the raptors in Custer State Park. 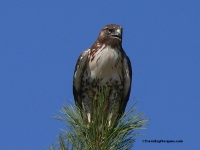 There is no doubt who owns this area..