Tech Info the how.

About Us, we traveled the USA.
Roscoe the Traveling Dog.
Harpo the Little Poodle who loved to travel.
Our Former Home on wheels.
FAQ Frequently Asked Questions
RV Links of interest,
TM Blog & letters.

Larry and Phyllis were married in 1968, graduated from Indiana University in 1969, and taught school for a few years. When their first child was born they left teaching and raised and home schooled two children with Larry working as a computer expert, including over 20 years for Eli Lilly and Company.

Larry and Phyllis were workampers: people who worked as they traveled.

Why we became The Traveling Morgans

Larry was forced to retire early due to injuries from an auto accident.

This forced a change of lifestyle, and the decision to follow a dream.

Larry and Phyllis are traveling and workamping across the United States with their two little dogs and trying to get acquainted with their wonderful country.

They spent more than 12 years taking things very slow, enjoying each day, and treasuring the opportunity.

While Larry's health improved, Phyllis began to have trouble with her back and heart. Travel became painful for Phyllis and in late 2015 it was time to stop traveling. We stayed in the Texas Hill Country.

In 2017 Larry and Phyllis sold their travel trailer in the Texas Hill Country. They moved to Charleston SC to join their son, where Phyllis is getting medical care for her heart and will be exploring what more can be done for her back, hip, and knees.

Phyllis and Larry are glad they followed their dream while it was possible, and would encourage everyone to follow their dream. Tomorrow may be too late. Father time is undefeated.

Phyllis and Larry want to share this wonderful country with as many people as possible.

Perhaps this will help you decide to follow your dream, whatever it is,or to help you learn about parts of the United States that you have not yet had an opportunity to visit.

Our first rig at Big Rock Candy Mountain in Utah. It really has a "lemonade spring". Our Aspen trailer with our same truck after being repainted and windows in the cap covered by photographs.

Our small dogs are Roscoe (dark Miniature Schnauzer, died in 2015 see A Tribute to Roscoe the Traveling Dog) and Harpo (white Miniature Poodle). 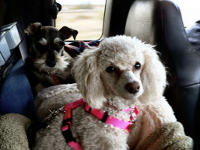 The Traveling Morgans used dog seats and a harness hooked to a seat belt. Roscoe and Harpo rode in the extended cab.