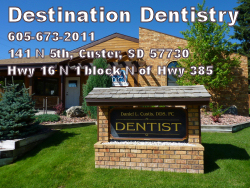 Destination Dentistry is Recommended by the Traveling Morgans for any dental needs in the Black Hills. They treated us like family. It is truly a case of world class dentistry meeting small town values. After being their customer the previous summer, we actually traveled here to get dental service from someone we trusted when we left California the following summer.

The scenery of the Black Hills is stunning.

It is easy to understand the Lakota Sioux attachment to their sacred Black Hills.

Human story telling in stone on a monumental scale (below) is at its best in the Black Hills.

The Black Hills extend into Wyoming (below) and the area of Devil's Tower National Monument (coming).

Natural stone carving is seen through out the Black Hills. Above ground naturally carved stone formations are best seen on scenic drives in Spearfish Canyon and Little Spearfish Canyon, also in Custer State Park, especially the Sylvan Lake area and Needles Highway.
Other areas not pictured with naturally carved rock include Iron Mountain Road and the area around Mount Rushmore (SD 244) and Rimrock Road (SD 44 west of Rapid City). 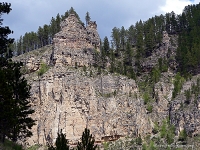 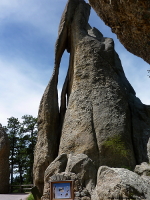 The Needle's Eye on Needles Highway in Custer State Park. The Needles from Mt Coolidge in Custer State Park. 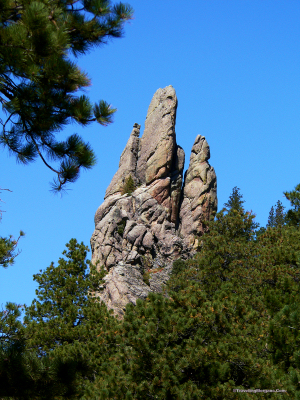 The Black Hills is known for human attempts to create stunning scenery. This is sometimes called Story Telling in Stone, and in the Black Hills, it is on a Grand Scale. Most people consider these attempts to be quite successful. Mt Rushmore Avenueh of the Flags. Crazy Horse from the bottom of the mountain. A Night Blast is done twice a year at Crazy Horse, and is a sight you will not forget.

A scenic drive that should not be missed is the Peter Norbeck Scenic Drive. This drive includes the Needles Highway and Iron Mountain Road It will go to Mt Rushmore, Crazy Horse, and through the town of Keystone and through parts of Custer State Park. Allow plenty of time to stop and enjoy. On Iron Mountain Road, you will see Mt Rushmore through every tunnel. If it is not in front of you, look the other way.

We will recommend also taking the Wildlife Loop in Custer State Park. Bridal Veil Falls in Spearfish Canyon just south of the city of Spearfish on US 14A. 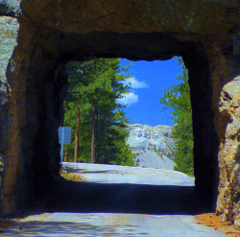 The impact on the mind of three tunnels framing Mt. Rushmore when traveling the Iron Mountain Road is generally disbelief. A Pig-Tail bridge on Iron Mountain Road;. This one is immediately adjacent to a tunnel with a view of Mount Rushmore from inside the tunnel. One of the great scenic highways in the United States.

The 1880 Train was once a branch line serving mines from Hill City to Keystone. It connected to the main line at Hill City.

The main railroad, eventually a part of the Burlington Northern, was important to the Black Hills during the mining hey-day. This is now the Michelson Trail, which follows this old historic railroad line for over 100 miles. With its limited grades, it is good for walking or a bicycle trip. There is a fee that can be paid at the official trail heads or the Custer Chamber of Commerce. You will find interesting geology and fantastic scenery and old railroad tunnels plus get insights into the Black Hills, such as small scale mining that is still in operation. An old steam train gives an introduction to the stunning scenery of the Black Hills. The 1880 Train runs from Hill City to Keystone.

1880 Train Compound Engine is used when more power is required. :
Wyoming Side of the Black Hills For the most part, spring, summer and fall in the Black Hills are wonderful. Summer temperatures are quite moderate. You should see the current weather forecast below.

The Black Hills have extremes of weather. From winter at 30 below zero and heavy snow even in May and June to severe thunderstorms with hail (below) in summer. Where there are summer storms, there are also rainbows (right). 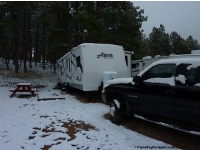 Heavy snow even in May and June.

The Black Hills are beautiful with friendly people.